PR is an Art, Not a Press Release: Creativity is King 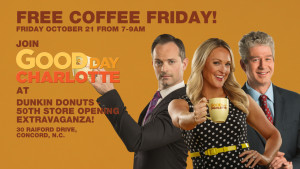 When you think of “creatives” in the world of marketing, you probably conjure up thoughts of people within the walls of ad agencies in metropolitan cities who have titles like art director, creative director, copywriter and graphic designer. But public relations is an art as well, and it requires a heavy dose of creativity. Without the creative juices flowing, you’ll have, well, a standard press release. In our minds, that’s just one tool in the toolbox but certainly not a solution. Meeting our clients’ goals is a combination of strategic planning and creativity, layered on top of the basic tenets of public relations. Let’s go through some client examples so you can see what I mean.

Dunkin’ Donuts (DD) just opened its 50th store in Charlotte and we needed to get the word out for the grand opening event and day-long food/drink specials. Getting guests in-studio is not easy
and no station is going to have a DD representative in to talk about a grand opening. But, the morning shows love cooking segments. DD has recipes that incorporate popular menu items. So, we came up with the idea to pitch our local culinary celebrity friend, Heidi Billotto, for this segment: Pumpkin Pancakes and Pie with a Treat Inside: Dunkin’ Donuts’ Coffee & Donuts IN the Recipes. We landed WBTV Morning News and FOX’s Good Day Charlotte. Plus, Heidi was able to include the new DD location in her WCNC Charlotte Today Restaurant Round-Up segment. She promoted the grand opening celebration and deals during each segment. (We also got FOX TV to live broadcast for two hours from the event with a different pitch angle.) No press release issued. 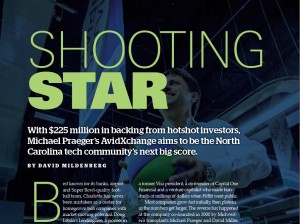 The entire Pivot PR team enjoys grabbing a cup of coffee with journalists, influencers and folks from the community on a regular basis. Earlier this year we sat down with the editor of Business NC magazine. During the conversation, we were able to pique his interest when describing AvidXchange, provider of accounts payable and payment automation. The end result: a six-page feature in the September edition. No press release issued. 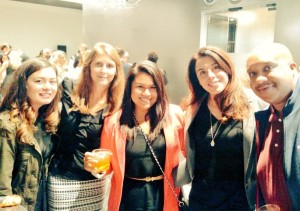 Public relations is not just about earned media. Pearl. Dentistry Reimagined (Pearl) just opened their second location and we decided to take a
grassroots approach. Knowing that Pearl’s success has been driven by Uptown workers who can pop in before, during or after work, we targeted 25 mid-sized businesses circling the new location. So that Pearl would be memorable and to create a warm entry to each offices’ gatekeeper, we hand-delivered their invitation to Pearl’s launch party attached to a gift basket that had cake pops that looked like pearls, pearl/clam-designed cookies and Pearl swag. Excited by the basket, each business emailed the invitation to dozens (and in some cases hundreds) of their employees. Read: awareness, more awareness and credibility (because it’s friend-to-friend). Our goal was to have 100 RSVPs. We ended up with 113, and all attendees were extremely warm leads. The awareness alone to the hyper-targeted audience was priceless. But, just in my conversations, I also had many people tell me that they were going to book an appointment. No press release issued.

Are you looking for a way to break out of your press release-only approach? Ready for results like these? Contact us and we’ll get those creative juices flowing for your organization.