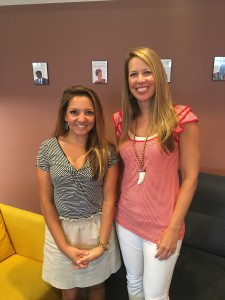 Big Fish in a Little Pond
Katie, formerly a U.S. News & World Report economy reporter, moved to Charlotte, N.C., in 2015 and was hired on as the retail reporter. Her role has since expanded to cover breaking business news (e.g., HB2 issue, shooting protests) and sports business. She feels that she can make a big splash in a mid-sized city like Charlotte whereas her impact might be more like a drop in the ocean in Washington, D.C. She enjoys working alongside the award-winning staff at The Charlotte Observer – many of whom have won Pulitzers for their journalism.

What Gets Katie Out of Bed
When asked which stories she gets most excited to write, she very quickly stated it is when she can hold public officials or executives accountable – particularly if the story pertains to where the city’s/community’s/company’s money is going.  She noted that it’s also fun to write the short, quick stories, such as a new restaurant with a cult following or a business that conjures up nostalgia for her readers.

Pitch Tips
I was also able to elicit some information from Katie that can serve as pointers for any of you who do, or will be, pitching her in the future. What falls in the won’t-cover box? Executive role changes and awards. Mainly it’s because we all must ask ourselves the, “Who cares?” question, and when it comes to that type of “news,” the only folks who do care are within the four walls of your company. Katie, as do all journalists, works in a shrinking newsroom and time is money. She must dedicate her time to stories that truly interest readers – the stories that make readers pick up the newspaper or click the digital edition open every day. Also – don’t write her a novella of a pitch. Short, sweet and to the point is best. She’s even drawn in sometimes by one or two lines that offer her a teaser of a story – and especially something exclusive or breaking. Lastly, if she feels like a certain topic has been fully covered by CharlotteFive or other local outlets, she might very well decide to not cover as the story has been told to the local community and she will free up time to tell a different story.

Here for You
I asked Katie what she wants our readers to know about her and/or The Charlotte Observer. I promise I’m not just saying this because she will read this as well but I thought she gave an impressive answer – simple in words but grand in its meaning. She wants all of you to understand how accessible she and her colleagues are. A quick google search on Katie and you’ll find her email address and Twitter handle. She invites you to send her tips, comments, etc. at any time. I can attest to her accessibility! She is always responsive when my team and I send her pitches (maybe I can also give oursevles a pat on the back for writing good pitches?), and she responded immediately to my invite to participate in our Q&A series.

She also expressed that she doesn’t have an agenda. She doesn’t insert her own opinions into her writing. She puts the onus on herself to tell you what you don’t know. It makes sense why “holding public officials/executives accountable,” is what excites her. She sees it as her job to uncover the story and tell it to you so you are fully aware of what’s going on in your city. No matter what you do, how old you are, Katie wants to hear from you.

Thanks again, Katie, for letting all of us get to know you better, and for keeping Charlotteans abreast of what’s going on in the Queen City